Vice and Versa in PERFORMANCE 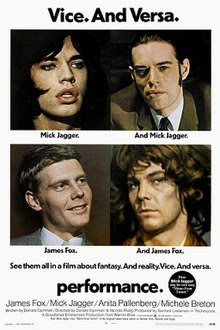 Gangsters, rock stars, violence, mushrooms, lipstick - all mix and merge in the British film Performance (1970).  Co-directed by Donald Cammell and Nicholas Roeg,  starring Mick Jagger and James Fox, it's a unique movie that you'll never forget once you've seen it.  I remember first seeing it many years ago in college, at a midnight campus show, and if I remember correctly, I think I was high and drunk at the time.  The movie, which unwinds like a hallucination, stunned me.  And I realized that I most certainly should not have taken anything before the movie to get buzzed.  PERFORMANCE itself is an intoxicant.  It is also, among other things, a great and unique gangster film, and I wrote about it for Criminal Element as part of my Gangster Cinema, British Style series.

You can check the piece out here: PERFORMANCE.

Posted by scott adlerberg at 11:27 PM No comments:

I shouldn't be surprised by the reaction, but a few days after its opening, I still find the predominantly negative reaction to ONLY GOD FORGVES irritating.  I understand that it's a film that won't appeal to a large audience, but the ferocity of the hostility directed at the film is what galls me.  You have so many critics and others out there who bemoan the sameness of Hollywood product and complain about the cookie cutter plots and mindlessness of your standard action movies and then something unusual like Nicolas Winding Refn's film comes along and people react like he created a crime against cinema.  You have geniuses in various papers and online venues who've written as if Winding Refn meant to make a typical thriller, and failed, or should have made a more conventional thriller, when that is so obviously not what he had the slightest intention of doing. To state the obvious:  ONLY GOD FORGIVES is a dream movie.

It follows the rhythms and speed of the subconscious mind, the nocturnal mind, not the  linear waking mind. Like David Lynch, for example, Winding Refn is one of those directors who has an ability to burrow deep into the recesses of the subconscious and come back with disturbing yet beautiful imagery.  Everything about ONLY GOD FORGIVES, from the languorous way it unfolds to the lack of logic in the story to the over the top violence to the sleepwalking manner of the actors, is dreamlike. Oneiric, to use an old film theory word.  In fact, though it was advertised as a follow-up to DRIVE, a re-teaming, after all, of Ryan Gosling and Winding Refn, the whole tone and mood of the film is closer to his earlier VALHALLA RISING, a very strange Viking saga. That Winding Refn dedicates the film, at the end, to Alejandro Jodorowsky, should make it pretty clear what kind of film he wanted to make.  To my mind, it's a luscious, absurd, lurid, violent dream of a movie, and anyone with a sense of movie adventurousness should ignore the numbing drumbeat of the negative reviews and give it a try. 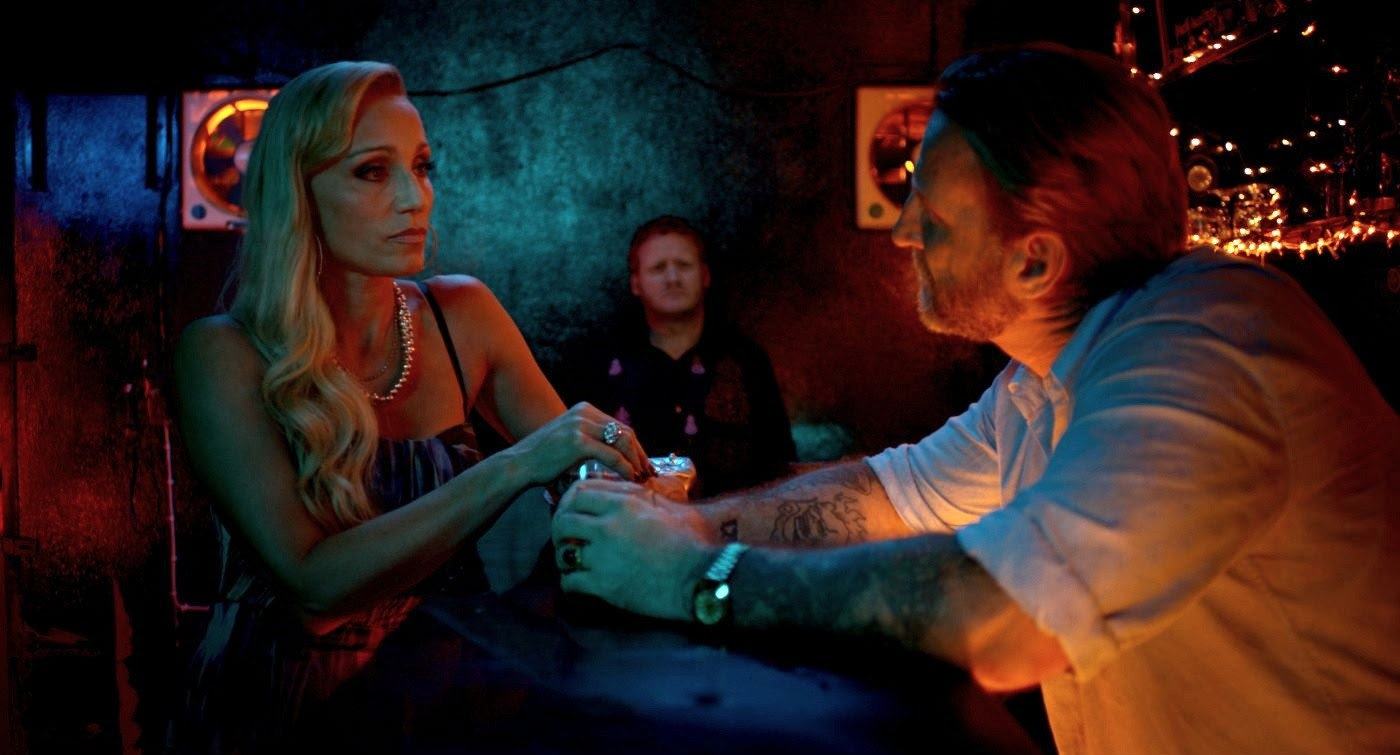 Posted by scott adlerberg at 12:07 AM No comments:

My Story in THUGLIT Issue Six

No introduction needed to THUGLIT, Todd Robinson's great crime fiction magazine.  Issue six just came out, and my story, "Come on Home", is in it.

Every issue of THUGLIT is chock-full of murder, robbery, mayhem, scheming, and vices too numerous to mention.  There is lowdown criminal activity to suit every crime reader palate.  With this issue, I'm happy to be part of a lineup that includes Kieran Shea, BH Shepherd, Rena Robinett, Jessica Adams, T Fox Dunham, Hugh Lessig, and Aaron Fox Lerner.

The issue's available at Amazon in two forms: the paperback edition and the Kindle edition.  The Kindle version's only 99 cents.  Great price for some damn good stories. You can check the issue out here: THUGLIT Issue Six. 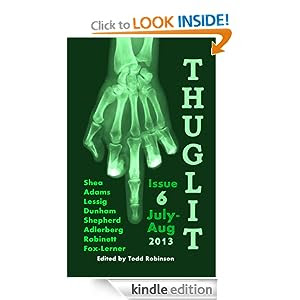 Posted by scott adlerberg at 12:45 AM No comments:

Long long overdue, I know, for any fan of crime fiction, but I finally have gotten around to reading Megan Abbott. I decided to start at the beginning, with her first book, DIE A LITTLE, from 2005.  As most readers of contemporary noir probably know, it's set in 1950's era Los Angeles and its world is the outer fringes of Hollywood. Of course it's superbly written and thoroughly researched - no surprise there.  Period detail is captured beautifully.  But what struck me most about the book is how to a remarkable extent Megan Abbott captures the workings of a mind that doesn't know itself.  Lora, the main character, is quite repressed.  She's someone cut-off from the core of herself and doesn't want to acknowledge what that core might be, what darkness may lurk there. 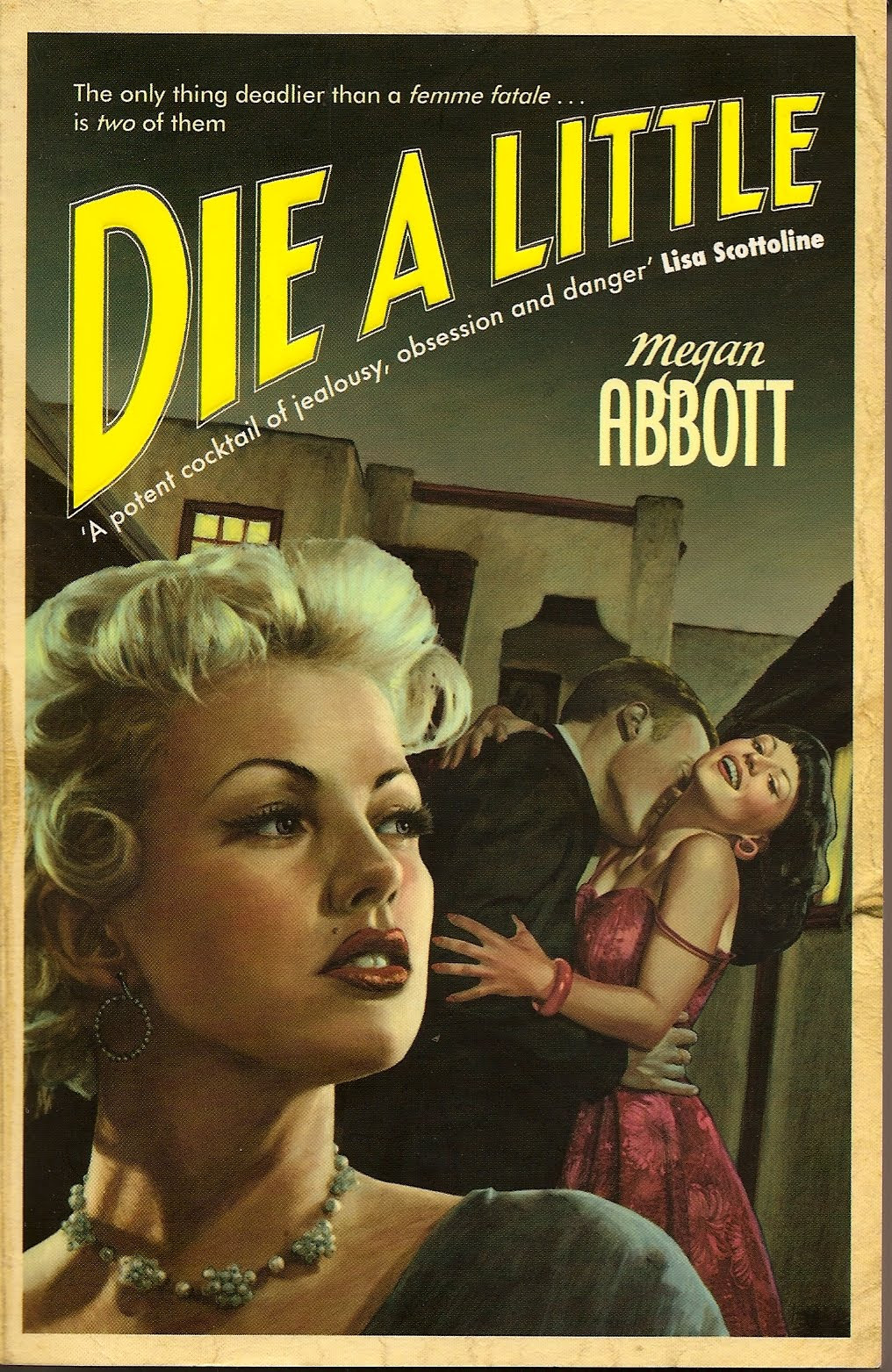 What is Lora capable of?  She doesn't want to know. The reader certainly doesn't know, at least at first, and the book needs time to reveal her, peel away at her.  Layer by layer, the onion is unpeeled.  That Lora herself is telling the story, showing you things about her mind and personality that she herself doesn't realize, is one of the things that makes this  book fascinating. It's all in the telling. This is not a noir with lots of action and surface violence.  The plot is actually slow to boil.  A character's glance at someone else at a party, a particular gesture, what's left unsaid, are the keys here. When you talk about noir like this, it's common to say it has echoes of Cain, Chandler, James Ellroy (the usual suspects) - and this does - but along with these noir masters, this book has a quality very unlike most noir, something elusive and ambiguous.  It has a quality that reminded me of an entirely different writer, someone with no connection to noir at all.

Indeed, Lora, with all her repression and her way of elucidating around a topic without stating outright what she means, reminded me of nothing so much as a Henry James character.  Strange, but true. DIE A LITTLE inhabits a world entirely different than James' typically rarified sphere and has nothing to do with ghosts or children, but Lora's level of repression and self-obliviousness, her refusal to look at herself, reminded me of the governess narrator in THE TURN OF THE SCREW.  Repressed rage simmers.  The desire to protect has rarely seemed so creepy and downright dangerous.  And as in so many Henry James tales, so much of DIE A LITTLE'S drama occurs in the narrator's mind, just under the visible surface of life.   It's up to the reader to see what the narrator can't see or refuses to see, and it's because of Megan Abbot's supple technique that the reader can see, clearly, what the very person telling the story doesn't.  Remarkable.

This has to be the first time I was reading a crime novel where at one and the same time I thought about James M. Cain and Henry James.  Two different ways of writing, two different ways of looking at the world and the way people interact with the world, that you wouldn't think could be fused so smoothly.  But Megan Abbott fuses them.  In DIE A LITTLE she writes something you could actually call Jamesian Noir.

.
Posted by scott adlerberg at 1:15 AM No comments: