The excellent Criminal Element site has put out its first crowd-sourced e-collection.  THE MALFEASANCE OCCASIONAL: GIRL TROUBLE, edited by Clare Toohey, is a batch of 14 stories on the very topic the title describes. And it's fair to say that the stories live up to the title. Girl trouble in all sorts of permutations is what is on display here, and quite entertaining this trouble is, too - well, if not for the characters involved, then at least for the reader.

"Follow Us on Facebook and Twitter", by Eric Cline, the first story, sets an appropriately creepy tone, as the narrator obsesses over a way to take revenge on the woman who fired him from his job.  While we can sympathize with his anger over his former boss's imperiousness, it's difficult for us to stay on his side when he uses social media to disguise himself and befriend the boss's teenage daughter.  It's all quite plausible and it seems as if the plan of vengeance he's hatched will work. Until.........

Revenge is the main theme also in another of my favorites - "Benign" by Caroline J. Orvis.  "I started stalking my breast surgeon almost by accident," is the first sentence, and as the story proceeds, we come to understand and sympathize with the narrator's outrage.  It's not even as if the doctor she's stalking did anything wrong or negligent, but his clinical coolness smacks of an insensitivity that puts you on the narrator's side.  Suffice it to say the irony present in the ending stings also.

Travis Richardson provides a different sort of ending in "Incident on the 405".  It's an ending I'm sure will divide readers. Some will think it works - an appropriate end considering the character involved; others may mutter a curse.  I'll confess I didn't love it at first, but it's grown on me since I read it, and the entire story that leads up to it is terrific: fast, suspenseful, and a sharp commentary on women who have to deal with powerful, piggish men.  There's a wonderful twist that occurs in the relationship between the two women in the story, and THE GIRL WITH THE DRAGON TATTOO, of all things, proves to be a source of great inspiration (not of the literary kind). 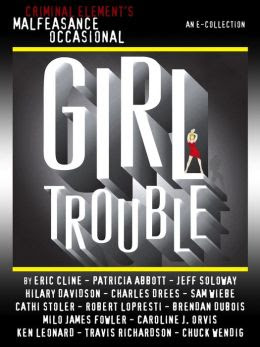 There are plenty more women in this collection fighting in some way to survive, and all told, the quality of the stories is high.  Women serve as thieves, authors, actresses, drug addicts, muses, daughters, mothers.  The stories range in tone from lighthearted to reflective to noirish to grim.  There's an amusing literary crime story, "The Wentworth Letter" by Jeff Soloway, and even a piece of dark, speculative fiction, "Girl of Great Price" by Milo James Fowler (very intriguing).

If you're looking for a good, quick read with a lot of variety, I'd suggest spending time with these women.  It's remarkable how much trouble these girls get into, and sometimes, but not always, get out of.

Meeting and chatting with Les Edgerton at Bouchercon in Albany prompted me to get around to reading a book I’d been meaning to pick up for months.  That book?  Edgerton’s THE RAPIST, which I’d heard and read so much about since it came out several months ago.


Well, it’s always nice when a book lives up to the praise you’ve heard lavished upon it…..and then some!


THE RAPIST is about Truman Ferris Pinter.  Pinter sits on death row for the brutal rape he has committed, and the death he seemingly caused his victim.  Pinter tells his story himself, and for the entire length of this astounding novella we sit squarely in Truman's mind, as twisted and cold a mind as one is likely to come across anywhere.  He’s a man utterly without remorse for his actions, but he also happens to be very well-read and articulate.  He lets us know in no uncertain terms  that he has his reasons for what he did.  THE RAPIST takes us on a tour through his convoluted mind, and through his twisted perceptions, we begin to understand his life, and damn if this utter sociopath makes us see things (at least a little) from his point of view.


Absolute brilliance is the only way I can describe this book. You could call it a noir novel, but I'd say it's more firmly in the tradition of works like Camus' THE STRANGER or Ernesto Sabato's THE TUNNEL or Walker Percy's LANCELOT. The novel as existential monologue told by an unrepentant criminal. Edgerton himself said that a prime inspiration for the novel came from the Charles Bukowski story "The Fiend", which is about a man raping a little girl. Except that in "The Fiend", as Edgerton put it, even Bukowski pulled back a bit, forgoing his usual first person narration to tell the story in the third person. In other words, Bukowski didn't handle this material head on; Edgerton dares to.

THE RAPIST also brings to mind Dostoyevsky's NOTES FROM THE UNDERGROUND and (I do not say this blithely) Nabokov's LOLITA. Truman Ferris Pinter is even darker in his personality than Humbert Humbert, but the brilliance and audacity he uses language with, to convince himself and us of certain things, is quite like Humbert. How reliable is this narrator? And Truman, like Humbert, can be, shall we say, not entirely self-aware. There is a house of mirrors quality to this novel that is quite Nabokovian. And as in LOLITA, we get inside the mind of someone almost everyone would consider despicable, and if we don't, well, like him, we certainly understand him. Then there's the Borges influence, the mind-bending what is real what is dream what is real aspect of the book.   In a way completely appropriate to Truman, the novel ends in a manner that reminded me of Borges’s great story “The South.”  I really can’t say much more than that or I’ll be giving too much away.  Suffice it to say, the ending is perfect, the last line a dinger that sums up Truman and reduced me to dark dark laughter.


This is a memorable book, a tough uncompromising book, a book that in the very best way calls upon a great literary tradition to be not quite like anything ever written before it.
Posted by scott adlerberg at 11:11 PM 1 comment: