Can't a Guy and his Kid Read on the Subway without Going Viral? 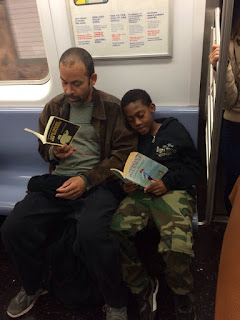 This innocent enough looking photo of my 10 year old son and me reading together on a New York City subway has gone viral.  Someone took this picture of us on Saturday afternoon, and by Wednesday morning it had led to various threads on Reddit, trending at one point to #1 there.  As of this writing on Wednesday night, it has been viewed over one million times on imgur.com.  All well and good, but the question I was asking myself all day, since finding out this picture was out and attracting so much attention, is why.  What’s the reason for the fuss? We’re only reading, for crying out loud, a father and his kid, something we do on the train quite often, but to judge by the comments on the Reddit threads, something about this picture hit people.  The experience of suddenly finding thousands of anonymous people talking about you and your kid, speculating about you, giving definitive opinions about you, has been surreal to say the least.
First off, there have been the people who ask bluntly why this picture is even posted and getting upvoted.  “I don't get it, is reading a book in public something people don't do anymore,” reads one comment, and another says, “How did this manage to reach the front page.. father & son reading wow.. ok?” To be honest, that’s precisely what I would have thought if I’d seen this photo causing a stir on social media.  These people, actually, seem like the sensible ones to me, and I understand if they get a little sarcastic in their tone. But then there are the people who are angry, their anger directed at any number of things. For brevity’s sake, let me try to list the anger points the threads contain:

1) Anger at the photographer for taking the photo at all.  The general thrust here: Can’t people go about their normal business without someone creepily using their phone to snap a shot?

2) Anger at the photographer along racial lines. This is a common one. The photographer took this shot out of an obvious condescension for black people, or as one person says, “It must be the person’s first time seeing black people in the wild reading.”  I lost count of how many people are certain the photographer is a racist. They’re sure he or she posted this out of some, perhaps unintentional, racial intent. Either the photographer’s amazed to see a black man and his son reading or the person’s astounded to see a black father at all with his son: “OMG! A father figure! Quick! Take a picture!  It must be like seeing a unicorn in NYC to see a man of color reading a book AND hanging out with a young child.”  Well, call me a naïve black man, but until I read the comments like these I didn’t give any particular thought to the racial motivations of the photographer.  I figured the person saw two human beings in a specific way that made them appear worthy of a shot. Of course I could be wrong, but…

3) Anger at the people whose views about the photo they disagree with.  These threads mostly consist of people cursing at other people on their thread or cursing at the friend of the photographer who actually posted the picture.

I could go on, but I think you get the idea. And I’m not even getting that deep into the self-styled wits among the commentators, the ones who came up with pearls relating to why we’re only reading books (who does that anymore?) because we can’t afford smartphones to read from, or Kindles.  Ah well, the commentators were entertaining, I can’t deny that, and to watch this little picture open up a world of arguing and dissent pretty much made my day.  My son and I in a photo that served as a Rorschach Test on Reddit.

The truth is we were just reading.  I happen to love reading, have read since I was a child, and I’m trying to pass that enthusiasm on to my kid.  Anything complicated there?  If he’s into a book and wants to read on the subway – and sometimes, yes, I have to push him to pick up a book – I’ll read my book at the same time as a form of encouragement. Plus, again, I just like to read.  If I’d posted this explanation on Reddit, would anyone have believed me? I’m not sure.

But what do I think the photographer’s intention was?  Since I know nothing about the person, I can only venture a guess.  And I like to go with what’s most straightforward, and most likely.  The person with their phone saw a cute scene, son leaning his head against his father’s shouder, the two reading separate books, and took a quick shot.  As a friend of mine said, the photo sort of says, “Look, there’s hope in the world.”  Probably we’re dealing with a softy at heart, and this softy simply wanted to put out a photo that would warm other people’s hearts. I’ll tell you what: that’s how most of my friends, people who know me, white and black, took the photo, and there were plenty of people on the Reddit threads too who conveyed a basic, “That’s a sweet scene. Don’t read more into it,” in their comments.  So maybe there’s hope after all, even on anger-filled sites like Reddit.  Who knows?  To start the day in normal fashion, unknown to all but family and friends, and end the day as the object of intense speculation among over a million people is enough to make me want to hole up in my house right now and sink into a book.  Not with my son, though. At this moment, it's late at night, and he’s asleep.
Posted by scott adlerberg at 6:40 PM No comments:

Recently, I got around to reading Patrick Modiano, winner of 2014's Nobel Prize for literature. For awhile now, I've been reading about him, and what I read made me think I would like his books, particularly Missing Person, his 1978 novel that won France's highest literary award, the Prix Goncourt.  A detective story about a man investigating himself, ran one description somewhere, and I was very intrigued.  I'm happy to say my expectations were fulfilled.  I liked Missing Person a lot and decided to write something about it.  It's a piece you can find here: Missing Person. Check it out if you have a few minutes.

Posted by scott adlerberg at 1:03 PM No comments: